Food Systems, Land Use and Restoration in Tanzania’s Forest Landscapes

In Tanzania, rice production has more than tripled between 2004 and 2015, making the country the second largest rice producer in south, east and central Africa. However, forests and wetlands are facing degradation under pressure of rice expansion and other agricultural development, which has detrimental effects on the delivery of ecosystem services and related livelihood and economic opportunities. Current yields are among the lowest in the world — between 1.5 and 2 tons per hectare — with inefficient supply chains, post-harvest handling and poor transport networks posing additional challenges. The Kilombero Valley, features a Ramsar-designated wetland system, part of the Selous Game Reserve, Tanzania’s largest National Park and a designated World Heritage Site, parts of the Eastern Arc Forests, several wildlife migration corridors and 75 percent of the world’s Puku antelope population. The valley is targeted for agricultural expansion, and at least 60 percent of the wetland area has already been converted to cultivated land. This ongoing expansion threatens the biodiversity in the wetland system, as well as blocking wildlife migration corridors cutting across the valley.  The North Unguja — Zanzibar — landscape, an area historically covered with rich coral rag forests hosts the islands’ major aquifer systems, which fuel food crop production. Demand for food has driven large-scale conversion of forest lands, resulting in high levels of land degradation. The area is the main target for ongoing investments in the rice production sector supported by the World Bank and South Korea. However, water needs for irrigation are increasingly becoming a constraint to both biodiversity and other water uses, and the intrusion of crop production in the remaining patches of high biodiversity forests is apparent.

Key barriers to be addressed — which aim to ensure that current and future rice production in the landscapes becomes sustainable and has the least impact on the environment — are inadequate institutional coordination and integrated planning systems for land- and water-use management. Policy and market conditions also fall short, and do not provide adequate stimulus for sustainable agricultural practices and value chains.

Tanzania’s mainly small-scale rice farmers will gain support for changing current rice farming methods with the added benefit of reducing the need of farmers to expand rice farming into other areas. 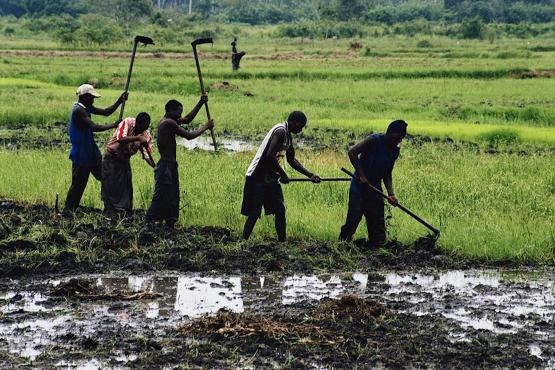